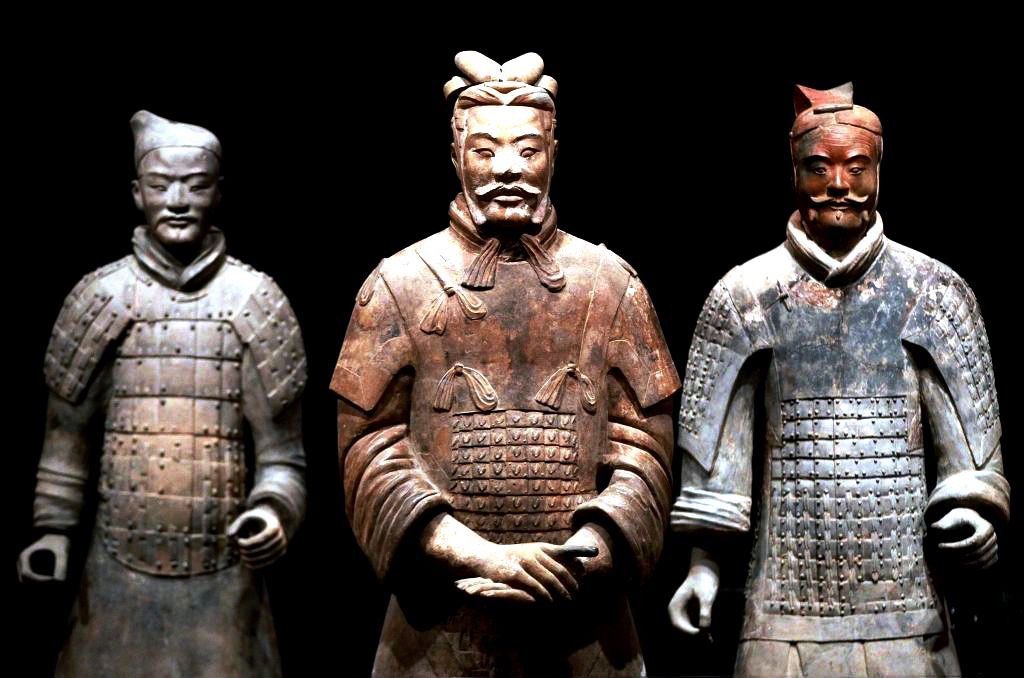 Ever since archaeologists excavated the first figures of the famous Terracotta Army of Xi’an in the 1970s, they have marveled at the pristine condition of bronze weapons accompanying the figures. Scholars suggested that this was evidence of one of the earliest known anti-rust technologies, and over time, this hypothesis took on the veneer of fact, at least in popular accounts. But according to a new study in Nature: Scientific Reports, it’s the unique chemical composition of the surrounding soil that is responsible for the exceptional preservation.

The Terracotta Army is composed of thousands of life-sized ceramic figures dating back to the late third century BCE, housed in three large pits inside the mausoleum of the first emperor of China, Qin Shihuang (259-210 BCE). Essentially a form of funerary art, these warrior figures were meant to accompany the emperor to the afterlife. They once held fully functional bronze weapons: spears, lances, swords, crossbows, and so forth. Over the decades, archaeologists have excavated tens of thousands of valuable weapon artifacts from the site, many of which were in nearly pristine condition, even though handles, scabbards, and similar organic pieces had long since rotted away.

Early tests showed traces of chromium on the bronze weapon surfaces, a metal element found in stainless steel that is resistant to tarnishing. Those traces suggested that the Qin artisans who made the weapons might have employed an early forerunner to the chromate conversion coatings invented in the 20th century, which are still used for preservation today.

“What we had before was a narrative that seemed plausible and was coherent with the data available, but one that was difficult to falsify,” said lead author Marcos Martinón-Torres, an archaeologist at the University of Cambridge. He decided it was time to revisit that hypothesis in hopes of coming up with a more conclusive answer.

This latest study is the result of a 10-year collaboration between the Terracotta Army Museum and University College London, where Martinón-Torres worked before coming to Cambridge. There have been plenty of past analyses of the metals, ceramics, soils, lacquers, and all the pigments used to make the figures and the accompanying artifacts, but they were largely confined to specialized disciplines. The collaboration brought all the pieces together so that knowledge could be integrated and used to develop a stronger hypothesis.

The interdisciplinary team especially benefited from a plethora of new analytic techniques that are faster, non-destructive, and most importantly, portable. “So we don’t have to remove samples from the objects, and we can bring the laboratory to the archaeological site rather than the reverse,” Martinón-Torres said. “The vast majority of these analyses were done in situ at the museum without compromising the integrity of these artifacts.”

This also meant the team could analyze a much larger sample size than prior research: more than 450 metal weapons, along with samples of terracotta warriors, soil, and lacquer. So they were able to spot patterns of where chromium could be found and where it was absent that would not have been readily apparent to researchers in the past.

The results: there was no correlation between the amount of chromium found on a weapon’s surface and its state of preservation. In fact, some of the best-preserved didn’t show traces of any chromium at all. Instead, the chromium previously found on the bronze surfaces of the weapons was likely contamination from the lacquer used on other objects at the site as a pre-treatment prior to painting them with pigments: namely, the terracotta warriors and all the organic elements of their weapons (lance shafts and sword grips, for instance, which were made of wood). High levels of chromium were found in the lacquer they tested, but only trace amounts in nearby pigments and soil—evidence of possible contamination.

So what is the secret to these ancient bronze weapons looking so good for their advanced age? It’s probably due to the surrounding Xi’an soil in which the Terracotta army was buried for 2,000 years, which has a moderately alkaline pH, small particles, and a low organic content. The researchers used an environmental chamber to simulate the weathering process, subjecting replica bronzes to extreme temperatures and humidity. Those bronzes buried in Xi’an soil were still pristine after four months; those buried in typical British soil showed severe corrosion. The well-preserved weapons also showed higher levels of tin in the bronze, which may also have contributed to their remarkable preservation.

There is still at least one remaining question: how did the chromium get into the lacquer in the first place? That’s a question that requires further investigation, according to Martinón-Torres, although he has a working hypothesis. The lacquer is basically the sap of a particular tree that becomes solid and waterproof as it cures. Qin artisans often mixed in various minerals to facilitate the curing, speeding up the hardening of the sap.

“So it is possible, but by no means proved, that Qin artisans mixed some chromium-bearing salt with the lacquer in order to facilitate the curing,” he said.

While the unique soil and the high levels of tin in the bronze weapons help explain the unusually well-preserved artifacts, the team doesn’t rule out entirely the possibility that Qin artisans had some technological secrets that also contributed. “In archaeology, we often say the absence of evidence cannot be taken as evidence of absence,” said Martinón-Torres. “All we can claim at the moment is that we have no evidence for any arcane technology used to help with preservation. That doesn’t mean it wasn’t there, we just have no evidence of it currently.”